The 2016 Labour Day long weekend arrived and another Subaru 4WD Club adventure was planned! This time, we were headed for Lake Cobbler and surrounds. This moving camp would start and finish at Mansfield.

Meeting time was lunchtime on the Saturday with departure planned for 12:30pm (all expected to be fuelled and ready to leave at this time). Everyone was ready early and we departed right on time. Mike & Meredith, Peter & Edith and Kadin were at Tolmie – having stayed at Stringybark Creek the Friday night – so, we picked them up on the way through.

Powers Lookout was our first official stop where we looked over the valley towards the Wabonga Plateau, south towards Lake William Hovell and Lake Cobbler (our destination) and north towards Whitfield. This spectacular lookout has one easy access viewing point and one that’s a little trickier to access. The latter involves a myriad of ladders and staircases which weave amongst the rocky outcrops before arriving at a metal platform floating above the trees and providing a sensational view and feeling. The views were taken in and cameras clicked. 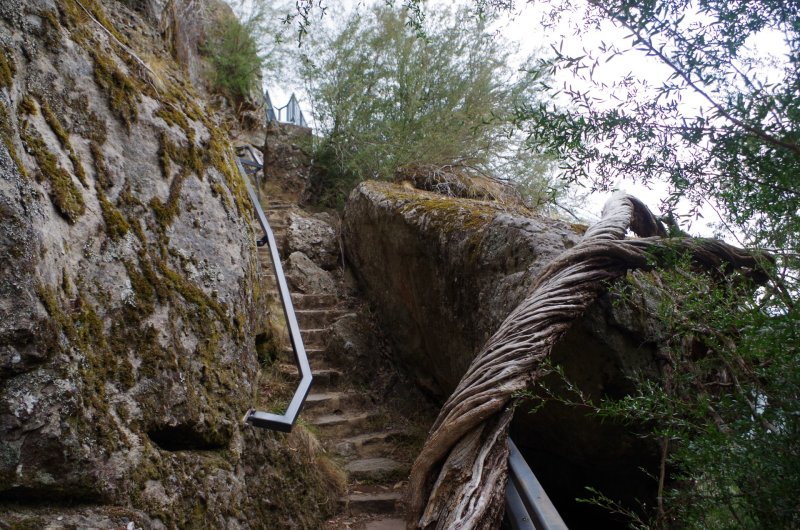 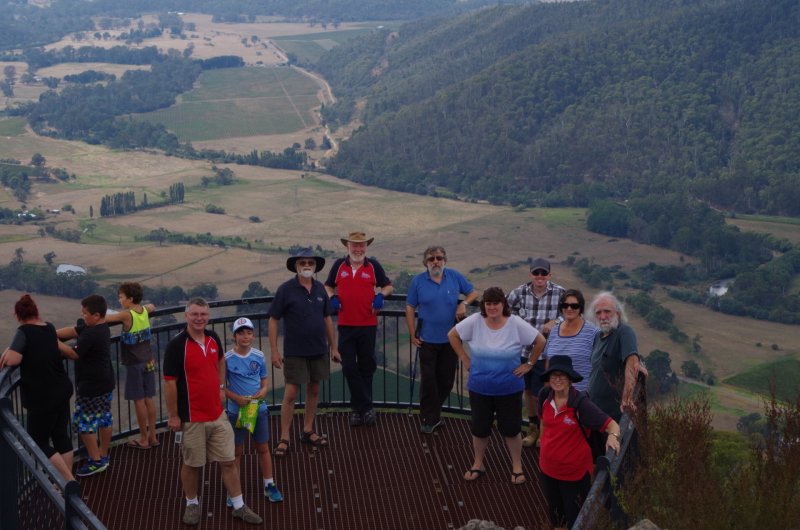 The View from Power's Lookout

After airing down, we hit the road again only to depart the black top shortly after. Our first four wheel drive track was a simple one with only a couple of rocky sections on slight inclines. At one point, a yelp was heard on the radio. Stephen radioed back, “is everything ok back there?” It wasn’t.

Tim had jumped out of his 40 series Land Cruiser at one point turning it off and leaving it in gear. However, the compression failed to keep the vehicle stationary and it started creeping forward while Tim was outside the vehicle. With his son, Jack, still in the car and it heading towards the Prado in front, a very quick-thinking Tim, kicked the tyre and the steering wheel turned sharp right and the vehicle ran up onto the bank and stopped on a precarious lean.

Stephen and a few others ran (and drove) back up the track to the situation. Once discussed (and with Jack safely out of the car), a recovery plan was put into action and the precariously-leaning Cruiser was back on the flat again. Well done to all involved in a very good recovery! And, again, well done to Tim for his quick-thinking which avoided anything else serious occurring.

Back on the move again, we soon arrived at Lake William Hovell. Afternoon tea was consumed and we were back on the tracks. South of Lake William Hovell came the fun stuff with the track deteriorating to an enjoyable four wheel drive track. A creek crossing was enjoyed (a little too much by some – more on that shortly) and then we climbed up to camp. Once at the top of a very decent climb, we arrived at camp. It was a very nice spot, trackside – grassy, secluded and with not another camper or traveller to be seen or heard.

As tents were pitched, Stephen looked over to Paul’s vehicle and noticed something was missing from the front of it – his number plate!! Paul had crossed the creek crossing earlier (presumably at breakneck speed – as water went up over the bonnet too!) and in that action must have lost his number plate in the river. Pretty sure the rest of us struggled to get our sills wet!

Happy Hour drinks were consumed and dinner cooked. A relaxing evening around the campfire was enjoyed by all.

Waking to a cool but beautiful morning, we aimed to hit the road by 8:30am. We were pretty well on time with the first destination Paradise Falls.
Paradise Falls, located within the spectacular King Valley, cascade an uninterrupted 31 metres down into a large chasm. Unfortunately, it’s been dry and, for our visit, there were no falls. Though, that didn’t matter. After the 15 minute walk to the falls, some of us opted to trek right under where the falls would land, underneath the overhang which makes humans look tiny from a distance. Looking up, you get the impression that the falls, when in full flight, would be amazing. 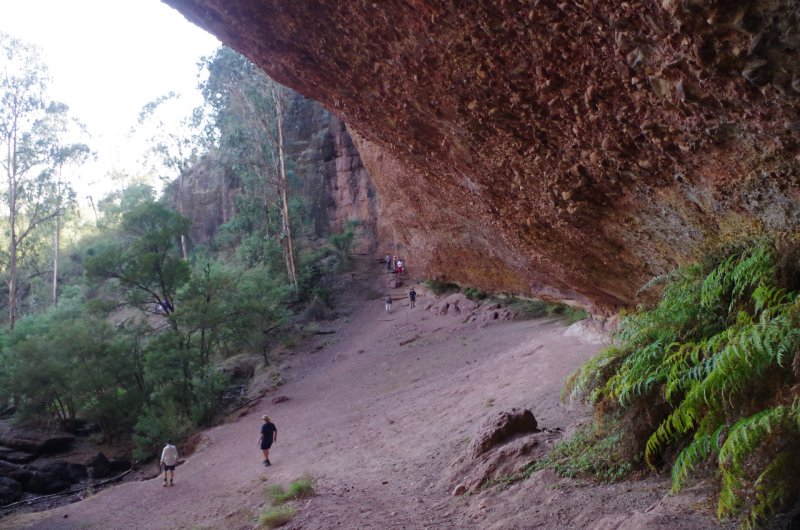 Under the overhand at Paradise Falls

Back on the road again, and we were headed for Bennie’s Campground for morning tea and then Lake Cobbler for lunch. Lake Cobbler is a very pretty artificial lake relatively high in altitude. We arrived for a late lunch.

Earlier in the week, one of our members, who has been with the club for about 3 years and lives in north east Victoria – but never actually been out on a trip – suggested that he might try to meet us at Lake Cobbler. Stephen gave him an estimated time of arrival. When we arrived, Peter and his family were there!

We explored a little, chatted to Peter and his family a lot and enjoyed lunch at this peaceful spot. It was great to be able to finally put a face to a name. Hopefully, we will see Peter and his family out on many more trips in the future. Funnily enough, there was also another visitor known to the club at Lake Cobbler. Dave (who had accompanied Peter L as his passenger on the Border Track Trip on Cup Weekend last year) had been touring around the area with his girlfriend and happened to stop by for lunch too! It was great to catch up with Dave again. 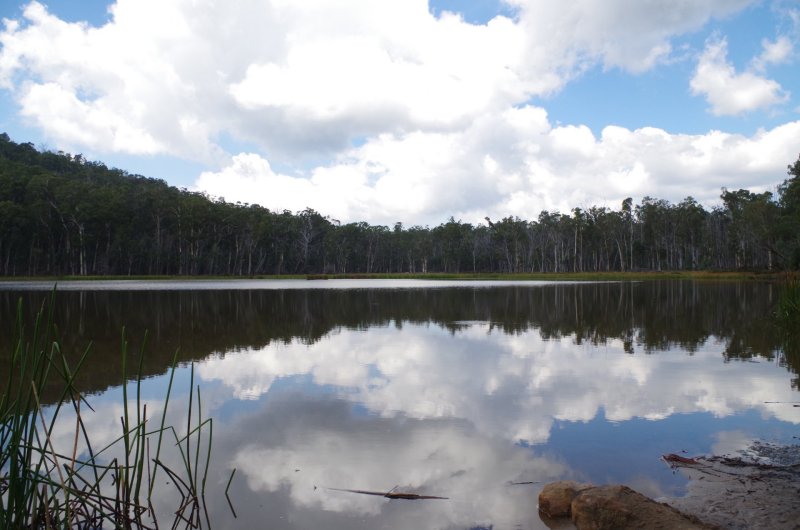 Following lunch and leaving Lake Cobbler, we tootled south-west via Cobbler Lake Track. Then, we turned right onto Speculation Road. Speculation Road is somewhat ‘famous’ for The Staircase. There is a 50 metre section of track that is fairly rocky. It used to be a whole lot more rocky back in the day. I recall, as a kid in the club, watching my family’s 1980 MY bouncing up rock ledges to get up what was much more of a ‘staircase’ than it is now. Some years ago, it was broken up (I believe for safety concerns). Unfortunate.

We had been lucky so far on the trip to have not seen many other vehicles. So, it’s not surprising that, on the narrowest and trickiest sections of track we’d done, that we would come across not just one vehicle but around eight – literally on The Staircase! Stephen and then Kadin had to pass them on the rocky section while others found spots further back up the track where they could allow the convoy to pass. This happened a few more times on the narrow Speculation Road.

Once down the winding Speculation Road, we arrived at King Basin Road and then King Hut. We had afternoon tea at the hut which was very busy with many campers. Once group photos were taken and we were back on the road, we were on the hunt for a campsite. King Basin Road is an easy but very pretty four wheel drive track which follows the King River (and actually crosses it around 6 times). There are many known camping spots next to the river along the track but the quiet, good ones are off some hidden side tracks. Stephen went down a couple for a quick look but to no avail. Until, one very pretty, quiet site was investigated. Despite it being very nice indeed, with plenty of grass and a water hole for swimming, there wasn’t another camper to be seen! We chose it and set up camp at a very civil 4:15pm.

The Tranquil Campsite next to the King River

Before too long, almost everyone was in the river for a swim! The water was lovely and a welcome relief after a couple of days in the dust. A relaxing evening winding down with drinks, dinner and then time around the fire was enjoyed by everyone.

On Monday morning, we were on the tracks early - by 8:30am. This was in anticipation of the busy roads back home and the vast majority of the group wanting to be home at a reasonable hour.

We wound our way around King Basin Road, before turning right onto Weston Track. Weston Track provided us a spectacular climb. Some sections were quite steep and rocky. Paul ran out of grunt right near the top of one of the sections and needed some guidance to back down and have another go (presumably with a little more right foot!). Once on Carters Road, the views were incredible! Carters Road winds its way down towards Tomahawk Hut where we had morning tea. From here, we tootled down from the hills, aired up and finished our trip at Merrijig. 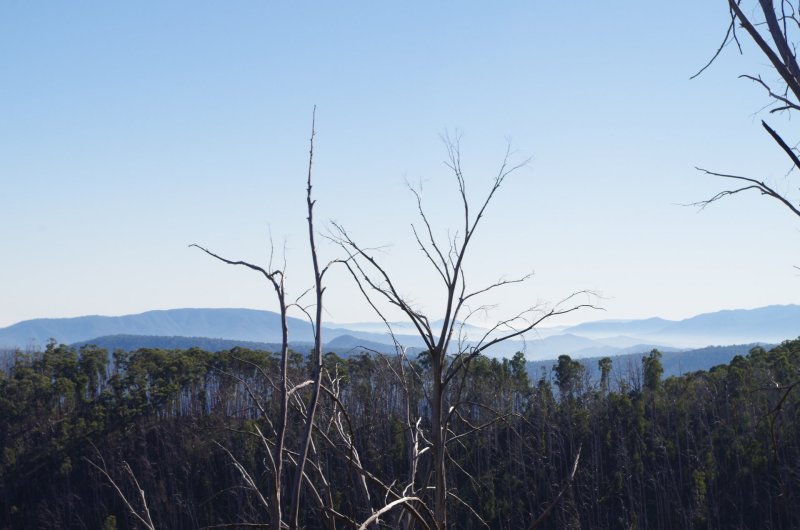 The view from Carters Road

Thank you to everyone who attended for making this a very, very enjoyable trip.