Peter, Edith, Mike, Meredith, Jan and Dale had a yummy breakfast at Yarra Glen Cafe and Store before the trip was to start.

The trip started with all of us meeting at McKenzie Reserve. Peter and Jean arrived last with poor Peter a tad under the weather. As Sandy hadn’t seen the park before and we had some time she decided to check out the park. What do we see but her and Jan swing on the big round swing like two little kids.

After rounding everybody up we head out onto the main road heading north and then into Eltham/Symonds Street, where it was noticed that M & M only had one full headlight working.

Skyline Road, Buttermans Track towards St Andrews, along this road Edith though she had made everyone take a wrong turn and make every turn back, to then found out we had been on the right road all along, which then involve everyone having to turn around again. Heidelberg-Kinglake Road, and Mittons Bridge Road. As we turned into Jackson Road we pulled over for a lovely view of the country side and you could see the city in the background.

Bald Spur Road leads uphill to the St Andrews Memorial. We stopped to have a look at the memorial to the people who lost their lives in the bushfires of Black Saturday in 2009. We then continued on our way till we reached the Whittlesea-Kinglake Road and head into the township of Kinglake to use the local amenities. It was hard to find parking as a local market was on in Bollygum Park. After using the amenities we all met up at the Frank Thomson Reserve, which is located at the highest point of the district. This offered views of the country side and the city.

We then headed towards Phesant Creek via the Whittlesea-Kinglake Road and turned off onto National Park Road to the Mason Falls where we had lunch among the towering gums.

We sat under the large shelters where there were lots of tables and toilets as well. After lunch most of us did the Masons Falls Walk (700 metres one way) which leads to the spectacular Masons Falls lookout. The walk takes about 40 minutes return. Peter waited in the car while we all walked. Nyree and Angus every managed to do the walk after Angus decided he didn’t want to original do the walk.

We said good bye to Peter and Jean at the picnic area has Peter hadn’t improved any. We did manage to fit in a group shot before they left; we asked a couple if they would take the picture for us. 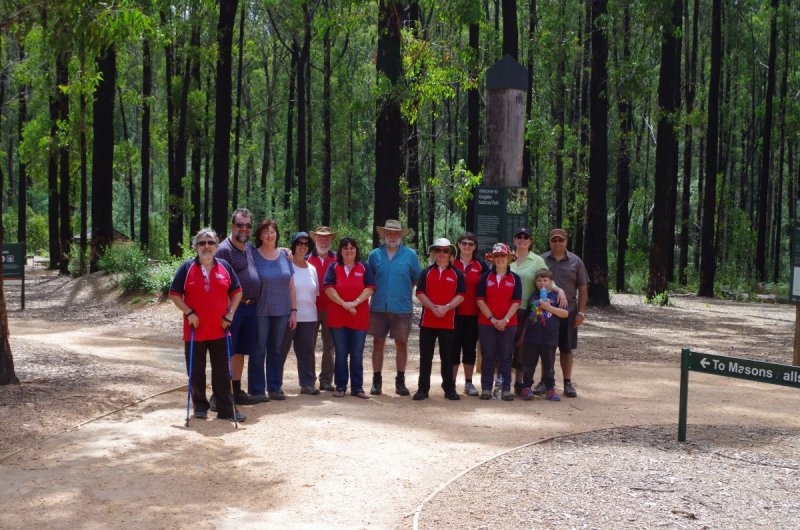 Head back to main road then turn off at Beale Ave. Going down this track you are given views of the surround country side and city. Odeos Road, Eagles Nest Road, Brennan’s Road East, Deep Creek Road, Ridge Road, Plenty Road, through Whittlesea. Reservoir Road and then to Recreation Road which takes you into the Yan Yean Reservoir where we had afternoon tea. After a cuppa and something to eat we all said our goodbye before heading home.

Thanks to all who attended and made this a great trip.