The Australia Day long weekend arrived and another Subaru 4WD Club adventure was planned! This time, we were headed for Ned Kelly territory. About 23 kilometres north-east of Mansfield is a small town called Tolmie. We would base camp at Stringybark Creek – the site of the shootout between the Kelly Gang and the police in 1878 – which is just 10 kilometres north-west of Tolmie in the Toombullup Ranges – an iconic Australian area for Australia Day long weekend.

Early arrivals took place throughout the day with Graham and Kerry picking the best spot at the campground and setting up their camper trailer. Stephen was next to arrive, then Jamie and Les, Michael and Meredith, Peter and Katie. Jamie turned up for the first time with his new camper trailer – well, at least ‘new’ to him. Les had given his old one to Jamie just before Christmas and so he arrived with a brand new one behind his Ford Falcon XR6 Ute. With all arrivals on the Friday (except Stephen) towing something, this was going to be the weekend of the camper trailer!

We relaxed into the evening, ate dinner and chatted all quite tired and retiring to bed without even lighting the campfire. After we were all in bed, Peter and Jean arrived around 11pm. In a mad rush to help tell them where we were, Peter Mynard got out of bed and was calling them on the CB radio while shining his torch towards them. Having had no time to put shoes on, Peter was then bitten by a bullant! The perils of being a good Samaritan.

It was a very relaxed start to the day on Saturday. We all took advantage of this with sleep-ins, slow breakfasts and welcomes/hellos to Peter and Jean.
Stringybark Creek Campground is a large, scenic and quiet spot within the Toombullup Ranges. Graham and Kerry had chosen a perfect site with plenty of shade for everyone – including all 14 vehicles we would have across the weekend!
At around 11am, we decided to do the short walk to the Kelly Tree and the actual site of the shooting between Police and the Kelly Gang back in 1878. As a group, we wandered around the walking track loop reading the fascinating Australian history, taking some photos and imagining the bushranger gang storming into the Police campsite. It was an eerie feeling as theories were matched with facts and discussion through the group echoed. 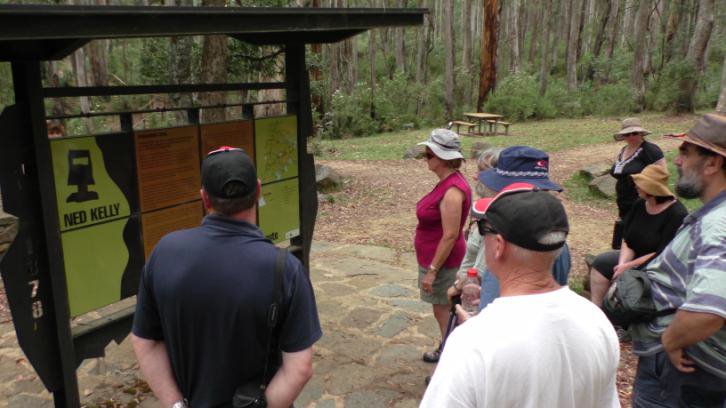 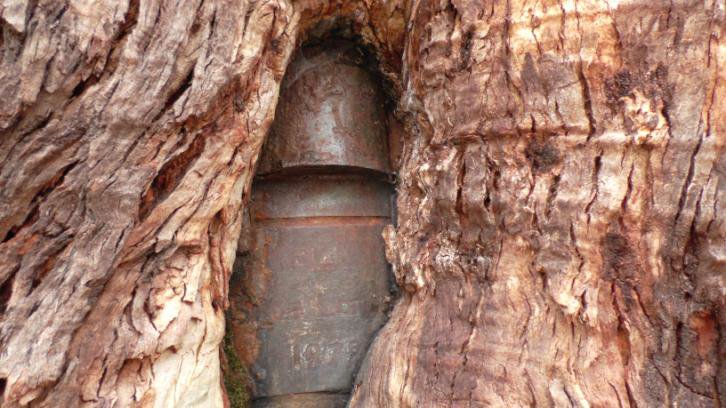 When back relaxing at camp, next to arrive was Peter and Edith and then Mike H. Lunch was made and maps and books emerged. Folks ate, read, chased shade and discussed plans for a short drive later in the afternoon. Stephen was keen to wait for Rick, who’d said he was going to try and get to camp early so that he, Jackie and Josh could come on the first drive.

A route for the drive was mapped out and we chose a time to leave; 2:30pm. Not having heard from Rick (and not having phone reception to call him), we thought we’d head off anyway. At 2:29pm, as we started the vehicles, Rick, Jackie & Josh arrived. We delayed the start time by 20 minutes, allowing the Koster’s time to setup camp.

We all then hit the tracks for a short 4WD exploration through the Toombullup Ranges – not too far from camp. We headed for Fords Bridge via tracks next to pine plantations. One particular section of track was steep and rocky and proved a challenge for some of our new members. But everyone was down safe and well. Once at Fords Bridge, we turned around and headed back for camp. This time, there were options; head back via the 2WD Tatong-Tolmie Road or back the way we came to tackle the climb back up the rocky track we’d come down. Most of us chose the trickier of the two options. The climb back up proved a challenge for Michael and Meredith as they continue to discover the capabilities of their Forester on 4WD tracks. Following an initial attempt, and after some coaching and a slight further drop in tyre pressures, they were up the top with a few shouts of glee from Meredith!

Back Back at camp, Dale and Jan, Stuart, Lynnette and Maddy as well as Paul had arrived. They had setup camp and everyone was enjoying a drink winding down for the day. 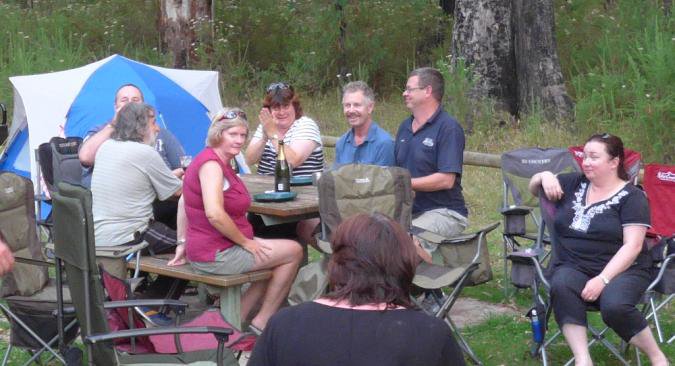 A Relaxing Evening back at Camp

Stephen then presented his new toy – a drone he’d recently purchased. Everyone gathered around as flight took place. Flying was a relatively new venture for Stephen and, with an audience and having only a few hours flight practice under his belt, there were nerves. All was going very well until control was lost at one point and the drone was drifting away… quickly. It came down a couple hundred metres away from camp in what would likely be dense bushland. Not good. A search party of nine went out on foot. Stephen was confident that he would not find it – that it would be in a tree or such dense bushland that it would not be discovered again… and that it had been an expensive weekend(!). However, just 30 seconds into the search, Peter Bellis found it! Excellent work, Peter! It had suffered some damage but nothing irreparable. The other notable damage was to Stephen’s pride. Having said that, the drone will make an appearance at future trips, so look out!
Following dinner, a relaxing evening around the fire was enjoyed by all.

Sunday was going to be a big day out exploring the tracks and Mount Samaria State Park. With a convoy of 12, it was going to be tricky to get through what was planned in time to make it to the Tolmie Tavern for our 6:30pm booking. Nevertheless, we tried. Once convoy order was established and the convoy meeting had taken place, we were on the road. We left just after our planned departure time of 9am – thanks to everyone for being ready, eager and on time!

Turning left out of camp, we travelled the Tatong-Tolmie Road to Fords Bridge, then left into Spring Creek Road and then right into Blue Range Road before arriving at the southern end of Mount Samaria State Park. Plans were in place to meet Jessica on the tracks somewhere in the state park itself. Entering the State Park, we climbed higher and higher and enjoyed scenic views south to Mansfield and across to Bridge Creek and the Toombullup Ranges. Stopping at Rocky Point Lookout, everyone did the short walk to the lookout. Discovering how the lookout got its name, some of us climbed the rocks and soaked in the views. While not a morning tea stop, it should be noted that Rick arrived at the end of the walk with a coffee in hand – looking very relaxed indeed.

Back at the vehicles and just before heading off, Rick discovered he’d locked his keys in the L-Series… presumably in all the excitement of making a coffee(!). It was broken into and we were back on the track again heading for The Kilns for morning tea. As we climbed higher again, Jessica was heard calling us on the CB radio. She was not far away and catching a slow moving convoy of 12 vehicles in the fast moving Pajero.

Not long later, we stopped at The Kilns. These old concrete structures were used for timber-seasoning in the early logging days in the area. Incredibly detailed history was read as morning tea was enjoyed.

Back on the track again and Jessica’s radio call was getting stronger and stronger and before long, she’d caught up to our tail-end Charlie. Our next stop was at the beginning of the Mount Samaria walk. Not aware of the difficulty of this walk, we all set off. It proved to be somewhat steep at the beginning before levelling out a little and climbing a little more towards the end. Once at the trig point at the top, spectacular views of Lake Nillahcootie to the west and Mt Hotham, Mt Buffalo and Mt Feathertop to the east were taken in. With such a big group, this walk took longer than anticipated and the planned trip to Powers Lookout in the afternoon was looking less likely.
Back down at the vehicles and on we drove for a late lunch at Samaria Well Camping Area. After we’d fuelled our bodies and it was decided we would not make Powers Lookout, we drove through the bush east towards the farming community of Wrightley. Arriving back at camp at around 4pm, we all relaxed and cooled down after a big day in the cars and a big walk up to Mount Samaria.

Just after 6pm, we drove the short drive into Tolmie (with some car-pooling!) for our meal at the Tolmie Tavern. Greeted by owner Robyn, who couldn’t have been more helpful with the booking (as well as alerting us to the fact that there was going to be a naturalisation ceremony and a supposed Ned Kelly/Police shootout re-enactment the following day) we all ordered our meals and drinks and chatted the evening away. Chicken parmigianas, fish and chips, racks of lamb and roasts were ordered and tummies satisfied.

On the way back to camp, firewood was collected by some of the vehicles and a fire was started back at camp. With all gathered around the fire, Stephen read out Ned Kelly stories, some facts about their lives and encounters with Police – in particular, at Stringybark Creek. It was a late evening around a perfect campfire for most. It was just hard to leave the fire and crawl into bed.

Given we didn’t make Powers Lookout the previous afternoon, an optional early rise for those who wanted to see Powers Lookout took place. Departing at 8:30am, we headed for Whitfield via Madhouse Road and Fifteen Mile Creek Road. Passing through farming communities, including Myrrhee, we headed down into Whitfield for a quick toilet stop. Back on the road and then into the bush via a couple of 4WD tracks, including Boggy Creek Track. Time ticked by and before we knew it, we realised we’d likely be late for the 11:30am naturalisation ceremony. So, we AGAIN missed Powers Lookout but would be respectfully on time for the ceremony. On the way back in to Tolmie, plans were made for some to head back out the Powers Lookout after lunch.

The naturalisation ceremony was enjoyable with an Australia Day Ambassador presenting and key speakers from the Mansfield community talking about the significance of the day. A nice way to end the trip. Unfortunately, the Kelly Gang/Police shootout re-enactment that was anticipated and promoted did not go ahead. Following the ceremony, we bid farewell to one another and most headed home following a fantastic trip for all! 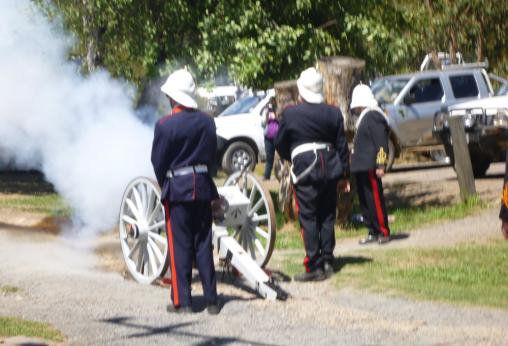 The Ned Kelly shoot out turned out to be a cannon - it was loud!

Thanks to everyone for making Australia Day long weekend a very special one in an iconic Australian area! Looking forward to many, many more!