By Edith Fullalove and Mike Dale

We had a lovely few days away at the Pyrenees State Forest, with great company and fantastic weather. We had a standing camp at Mountain Creek Picnic Area at Moonambel.

Meredith, Sandy, Edith and Peter arrived on the Wednesday to secure camp sites. Lunch was had at the local cafe in Avoca, “Olive & Lavender”. When we arrived at camp we set up, and then Meredith and Peter went in search of firewood. We had yummy soup for dinner that Meredith had made for us.
Thursday we had a very relaxing day waiting for Mike, Kadin and Alan to arrive. We went into Avoca for afternoon tea. We had a great roast that was cooked on the fire in a camp oven; it was so nice not to have to cook tea. Mike and Alan arrive just in time for tea. Stephen arrived a bit later in the evening. 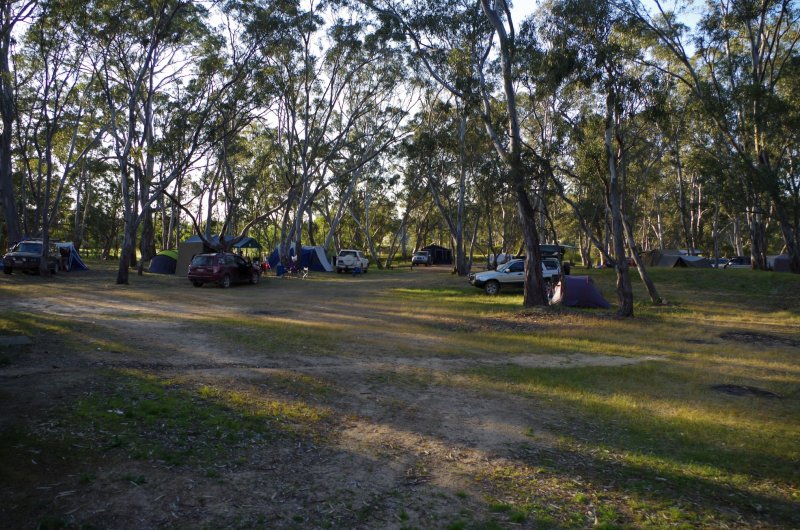 2 October 2015-Friday
Meredith cooked bacon and eggs for those who were there for breakfast on Friday morning, yummy thanks’ Meredith. Graham, Kerry, Dave, Jesse, Charles and Paula arrived at different times during the morning and set up their camp sites. Lynette rang to say that herself, Stewart and Maddie were going to be a bit late, so we waited for them to arrive. They found a place they were going to set up and left the camper which they would set up when they got back from our afternoon drive.
We left the camp ground around 2:30pm and made our way out through Moonambel onto Moonambel-Warrenmang Road, Glenlofty-Warenmang Road, then a series of 4WD tracks: Cactus Track, Barkley Track, Blue Mountain Track and finally Irongate Track where we had afternoon tea in what has been dubbed ‘log valley’ (we had to clear a large log there on our pre-trip). We left log valley and headed along to Glenlofty-Warrenmang Road, and then back to more 4WD tracks: Blue Mountain Track, through Landsborough Reserve, down Squatters Track, back to Cactus Track, and finally onto Saltpatch Track, where we saw some old gold mine diggings. We then headed back to camp for dinner. 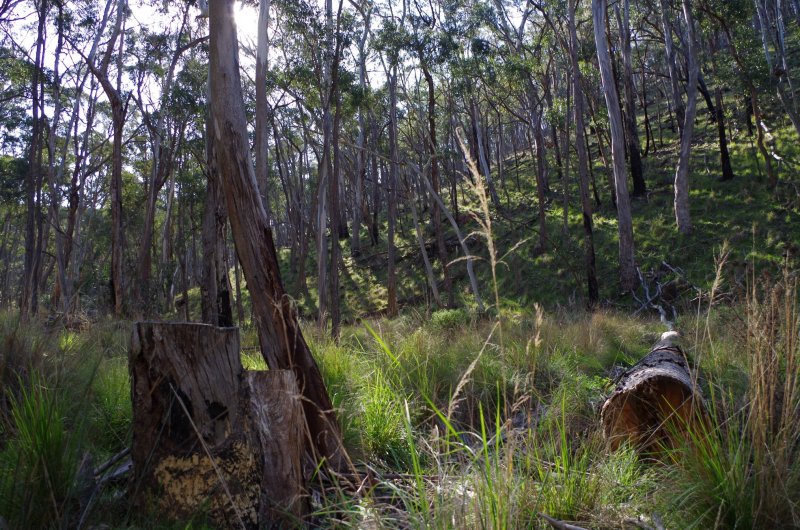 The Serenity of Irongate Track

In the evening there was a roaring fire with toasted marshmallows, where Maddie tried valiantly to get Steve to eat a marshmallow but it was not to be. 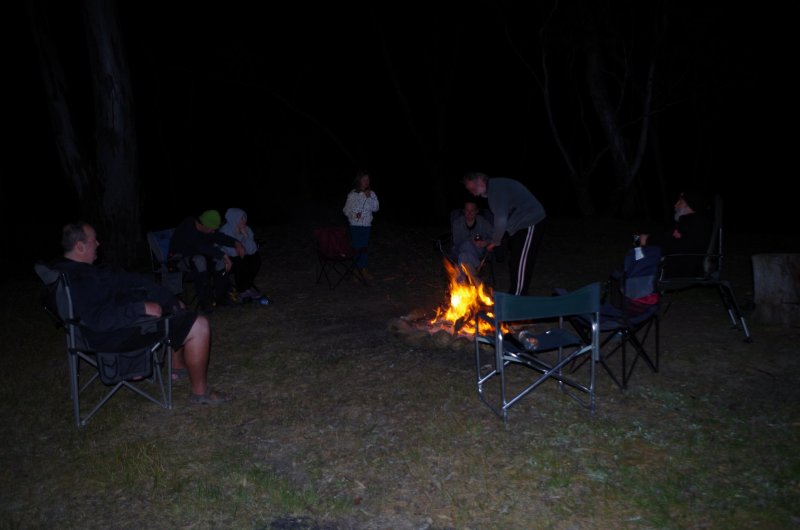 A fire good for roasting marshmallows

3 October 2015-Saturday
Left camp at 8.30am and made our way out through Moonambel to Landsborough Road, and up Landsborough Ridge Track. Along the ridge track there were lovely views so we stopped for some pictures. You could see the Grampians to the West and the Pyrenees to the East. The day was clear and sunny with a gentle North Westerly, it was just breathtaking. We also stopped at the cairn at the top of Landsborough Hill. After a few tricky ascents the ridge track met Malakoff Track which wound it’s way through forest and at the bottom we stopped to have morning tea in a lovely clearing. 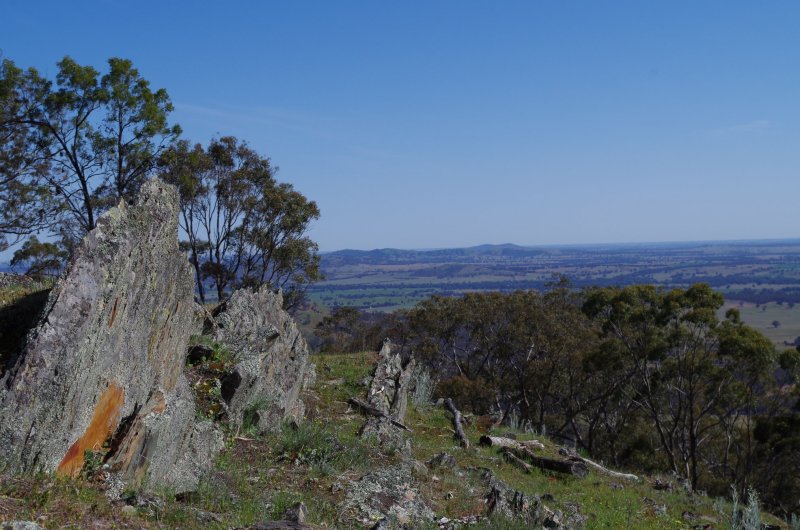 The Northern view from Landsborough Ridge

Some of the group went and had a look at a fairly extreme climb on Hill Track which Mike, Meredith, Peter and I had discovered on a pre trip but did not attempt. There were even bits of car parts up the top from vehicles that had been up (or down) before at some time. We decided we didn’t want to leave car bits!
Once we got back to the others waiting in the clearing we headed off along the black stuff for a bit and then headed up Smith Track, Black Range Track, Dridian Track, Spring Creek Road and finally Cameron Track where we met a group of motor bikes heading in the opposite direction down the track which made for some interesting moments as we were heading up. The bottom of Cameron track is quite steep and was not in the best condition. We stopped at the camp ground at the top where we had lunch in the shelter and had a lovely view overlooking the valley.
We then hit Cross Track, Main Break, New Nowhere Track (which by the way goes nowhere!), Main Break Track (again), No.2 Creek road then we reached the Percydale historic area and Governor Rock lookout where we had our group photo taken. We had great views here as well; you could see the wind turbines at the Waubra wind farm and to Avoca and beyond. 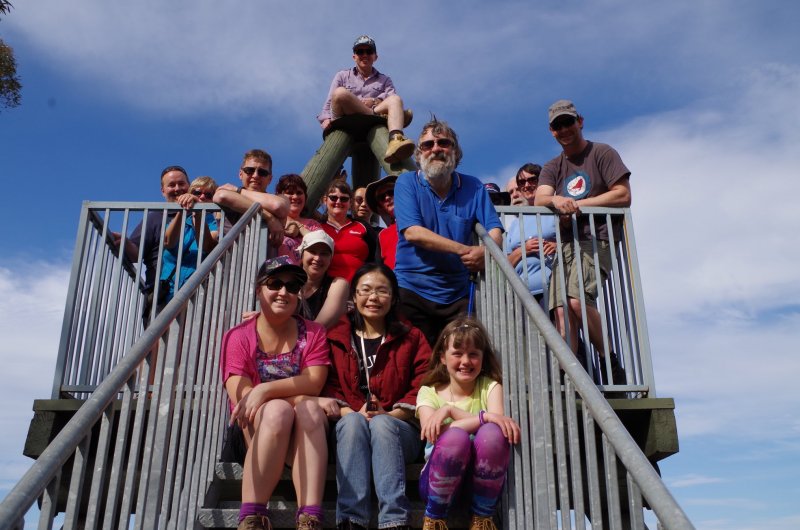 The group on high at Governor Rock Lookout

We continued past the tower back onto NO2 Creek Road, then onto Vinoca Road which become black top and headed into Avoca. Some of us got fuel, ice creams or headed back to camp to rest up before going out for tea.
We walked down to the Moonambel Hotel for dinner; there were a couple who went in their cars. A lovely time was had and another roast meal for some of us. Dessert was very nice also. We were given a special deal on dinner and dessert. Most sat up for another fire to finish the night off.

4 October 2015-Sunday
Daylight savings started so we all lost an hour of good sleep, and as a consequence the start of the day’s trip was a little bit later because of it. Lynette, Stewart and Maddie needed to head home early so didn’t come on this outing. Some people packed up as they would leave from Avoca after the trip, while others had to return to camp to pack up. Graham and Kerry had time to stay another night. Lucky them; it is such a lovely place. Kerry told me they had the whole place to themselves that night.
Graham and Kerrie jumped in our car for the day, we certainly enjoyed their company, and it was like having children in the car again!
We left camp at 10 am and headed along Moonambel-Warrenmang Road, into Warrenmang, then along Miles Lane and Miles Track. Our first climb of the day was up Sanderson Track which had deteriorated significantly since the pre trip. A couple of people needed multiple attempts on some sections. We then headed along Main Break, No.2 Creek Track, and down Fraser Track. Fraser Track has some long steep descents in places and Dave’s car certainly had that lovely aroma of brake pads which had been used a little too often. We had morning tea at Fraser’s Trail Bike Picnic Area.
Mike left his car at the picnic area and jumped in with Alan and Sandy. We headed out along Elbing Track and onto Old Bluff Track. At the bottom of the first steep section we met another group who had a car stuck half way up a fork in the track. From about this point on things got a little complicated!
Steve decided to walk up and see what was happening. The other group moved their cars to the side so we could get past, which we did and we waited at the top of the first steep section for everyone to catch up. At this point Alan had to head off back down the track to Avoca to drop off Sandy for lunch with her family, and Michael decided it was time to go home. In the mean time the other group had recovered their vehicle and was heading up. Things got to be a little bit of a squeeze with Alan and Michael going down and the others coming up. Everyone got past and the other group continued up the track.
Alas for everyone involved the third car in their convoy broke a CV joint and was stuck on the steepest section of Old Bluff Track and that was the end of that. They planned to winch it up the rest of the way – but that was going to take forever. Mike and Meredith hopped in with Charles and Paula and we headed back down. Although first Stephen wanted to test his car on one of the extreme sections of Old Bluff with the assistance of Graham and Kerry as guides. There is some good video of this floating around (thanks to Kadin).
Once back at Fraser Picnic ground Mike picked up his car and Alan had returned from dropping off Sandy. We then headed back up Fraser Track, which was a steep climb and a couple of tricky sections for some. We then wound our way along Main Break and down Jackson Track, where Kadin had to move a big rock from the middle of the track so the trip leader could get his car down. Jackson Track has a fork and Peter and Stephen did the loop. Stephen decided to go up and down the hard way. Everyone else did the chicken track, even Peter and I decided after what Stephen and Kadin had gone through (on Old Bluff) we would take the easier track. Go Stephen!
We reached Clear Patch Track which was very dusty and not very clear at all; you couldn't see the car in front of you at all in some spots on the track. Some poor camps beside of the track would have had lots of dust their way. Then we came to Farnsworth Track which was a pleasant scenic drive along the side of some hills. This joined Sardine Track and hit the black stuff  at Glenlofty-Warrenmang Road.  Charles and Paula headed back to camp to pack up, while the remained of the party headed into Avoca for a late lunch around 3:00pm. Stephen, Dave and Jess left from Avoca to head home, Mike, Meredith, Peter and I headed back to camp to pack up.

The tracks were a little dusty!

Thanks to Mike and Meredith for a great run trip. Mike plans to run a future trip there titled ‘Avoca trip for crazies!’ where Hill Track can be once again considered.